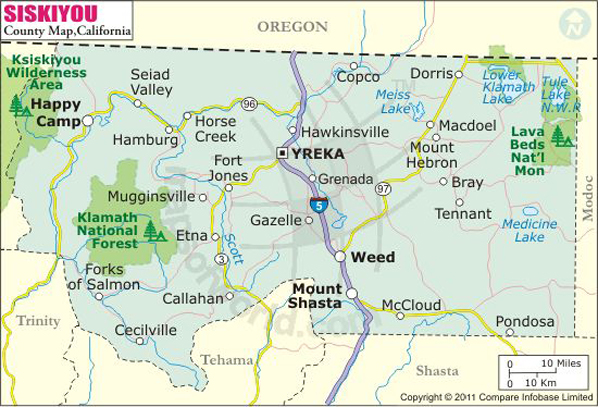 Siskiyou County The Jefferson State, Play, Live Everyday Enjoying the Fresh Air In All It's Beauty

The county is the site of the central section of the historical Siskiyou Trail, which ran between California’s Central Valley and the Pacific Northwest, following Native American footpaths.  In the 1830’s, the trail was lengthened by trappers in the employ of the Hudson Bay Co., and again by “Forty-Niners” during California’s Gold Rush.

Today, Siskiyou Transit and General Express (STAGE) operates buses between the more populated areas of the county;  and Amtrack connects Yreka, Weed, Mount Shasta, and Dunsmuir to Oregon and Sacramento.  Most of the county’s large cities are along I-5, making travel fast, easy and efficient.

Siskiyou County is one of the most ecologically diverse regions in the world, and more than 60% of its land area is

managed by agencies of the Federal and State governments, such as the U.S. Forest Service.

Due to its outdoor recreation opportunities and its Gold Rush era history,Siskiyou County is an important tourist destination.  The county partially encompasses nine major Protected areas, including Forests, Refuges, a Grassland, and the Lava Beds National Monument.  After the discovery of gold near Yreka in 1851, prospectors flooded the area;  there are several ghost towns to explore!

In the mid 1880s, the Central Pacific Railroad was built along the Siskiyou Trail, which brought the first wave of tourism, drawn by the county’s many summer resorts, and to hunt and fish.  Today, activities include skiing, snowboarding, hiking, mountain biking, camping and wilderness recreation. 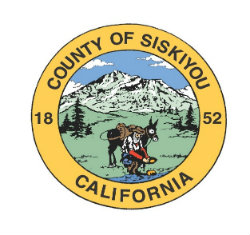 In the center of the county is 14,000 foot Mount Shasta (complete with a winter sports center), and major tourist attraction, with its many resorts and vacation homes.

The western part of the county includes Scott Valley, with its many wide, tree-lined meadows and large cattle ranches.

The northeastern portion of the county includes basins such as Butte Valley, an the Lower Klamath and Tule Lake basins, which have some of the deepest and richest soils in the state. Butte Valley is the leading source of premium strawberry plants in North America.

The county’s water is pure and abundant, making Siskiyou a significant source of bottled water, that is distributed throughout the nation.

Lady of The Lake Siskiyou

My Fast  "EASY SEARCH" makes your property search so easy to find all the properties for sale in Siskiyou County, Shasta County and Redding, CA and with IDX technology the new listings, price changes, will be updated daily by the Shasta Multiple Listing Service on your computer or smart phone.   In order not to miss properties you are searching for, sign in to get your updates and to view large photos. Just Like My Fast "Easy Search simple to get started, to save all your searches, save favorite properties. Try it, it is free!

Lot has one of the most majestic Views of the mountain you could ever get.Recreation abounds in this great area. Skiing Hiking, Fishing Golf just to mention a few. Grandm...

Secluded 5 acre lot near the golf course with plenty of trees and privacy.

Looking for the perfect home in the perfect place?  Chances are you'll want to check here first. 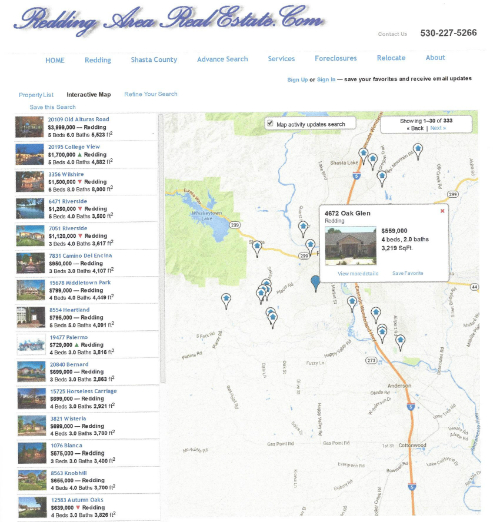